skip to main | skip to sidebar

A bridge into the unknown? 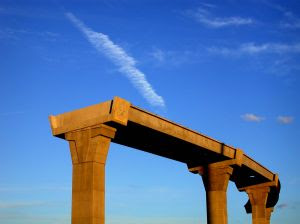 Remember when "journalism" meant objective, fact-based reporting? Yeah, me neither.

This is a slightly mean spirited post, and I'm not real proud of that, but this AP "article" is a great example of why my respect for the press is in a state of accelerating decline. Not only is it just "not news", it's crappy journalism, written in a style that suggests the author spends a lot of her free time working on a really bad novel. Some of my favorite (in a "least" sort of way) quotes:

"he (Obama) is seen as a bridge that leads toward the country's next era — a guide into the new unknown."

Well, at least we finally got rid of the old unknown. The new unknown is way better. Who the hell builds a bridge into the unknown?

And check out this remarkably continuous block of twaddle (that's my new favorite adjective):

"Why the middle ground, then? Does it hint at a new flexibility? Or is it quintessential American optimism, tempered by the pragmatism of a country growing up? Are the nation's problems subverting knee-jerk politics?

Or perhaps this is a reflection of Obama himself as he straddles issue after issue with a management style that's both pragmatic and idealistic, but also leaves him open to criticism that he's failing to lead.

Also perhaps this: Facing the possibility of American decline, people may simply be at a loss for what to do — and looking, as so often before, to their president to guide them."

Why all the questions? Do they hint at a lack of content? Or is it quintessential journalist trying to meet the editor's line count quota? Are the author's politics subverting her ability to do her job?

Or perhaps this is reflective of a journalist who tries to straddle issue after issue with a writing style that's both pseudo-objective and faux-insightful, but still leaves her open to criticism that she's failing in her role as a journalist.

And also perhaps this: Facing the possibility of American journalism decline, many people may be at a loss for who to read -- and looking, as so often before, to the AP to the guide them.

Yeah, I just did that.

The piece could be equally at home in either The Onion or in Time Magazine, but has no business coming through the AP wire as "news".

I still can't believe she opened a "news article" paragraph with "And also perhaps this:". Why not just say, "Oh, and here is some more crap I just thought up". Here is a tip to any journalists out there: "perhaps" is a flag word that says "I'm about to throw objectivity out the window and inject my own opinion, err, I mean, analysis".

The funny thing is, a quick search about the author, Liz Sidoti, reveals that those on the left and the right both despise her. Apparently, she bought Senator McCain some donuts when he was running for President.

I'm not mad at her, though. I am mad at her editor, and whoever hired her editor. They are the real problem. Writers write; it someone else's job to decide what actually gets published. Those are the people that are really destroying their industry.

Both Republicans and Democrats (not to mention us "Old Whigs") deserve better "journalism". Then again, perhaps a people gets the press corps it deserves...

Wisely Managed
I’m a 30-something businessman in Chicago with a background covering engineering, logistics, technology, and finance. A blue-eyed, corn-fed Midwesterner who eagerly served as an Army officer after college and discovered economics in graduated school. A principles of economics course opened my eyes to how the world actually works, and a political economics elective class as an exchange student at a Swiss university introduced me to John Stuart Mill, Frédéric Bastiat, and Friedrich Hayek and turned my politics on its head.